The team at Sri Thyaga Brahma Sabha at Vani Mahal in T. Nagar make sure they put a grand look to the stage to colour the opening evening of their Season festival.

And they always seem to have a host of banks as sponsors. The bank's reps are always on stage and honoured - perhaps the sabha's connections ensures that it gets the money to run this long festival of music and dance at its main and mini auditoria.

Swami Omkarananda of the Swami Chidbavananda Ashram in Tamil Nadu was the chief guest for the festival launch on Sunday, December  9.

Professor and scholar S. Raghuraman took some time to elaborately felicitate all the awardees. Raghuraman who is a favourite resource person for dancers who plan and produce dance-dramas highlighted the role that the arts plays in daily life, saying that the arts alone could calm a agitated world.

Y. G. Mahendra recalled the days when his family-run UAA theatre troupe would stage plays at the old Vani Mahal, and when people travelling in buses would peep out and watch two minutes of the play through the open doors of the auditorium whose walls ran along the main road.

Later, Lakshmi Ramaswamy and her disciples presented a dance production. 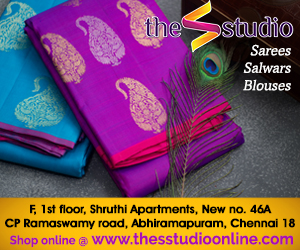